The Grand Canyon Caverns is located along Route 66 in Northern Arizona and is home to the largest dry caverns in the United States, located 200 to 300 feet below the surface, and in the middle of 3,000,000 acres of untouched land. Traveling between Chicago and Los Angeles, Route 66 is one of the greatest and most scenic roadways in America.The Grand Canyon Caverns is in the middle of the longest stretch of the road still in use, 100 miles of beauty and scenery you will not get on the interstate.

Millions of Years in the Making

The story of the Grand Canyon Caverns’ formation starts 345 million years ago, when the entire Southwestern U.S. was covered by ocean. As tiny sea animals lived and died, their shells and skeletons fell to the ocean floor creating mud that was rich in lime deposits. This mud eventually became the limestone bedrock which is the base rock of the Caverns. Later volcanic eruptions and earthquakes caused the ocean floor to rise several thousands of feet. The Caverns’ elevation is now more than 5,000 feet above sea level. These upheavals split the earth’s crust and as rainwater started entering these cracks and seeping into the limestone, the Grand Canyon Caverns were formed. 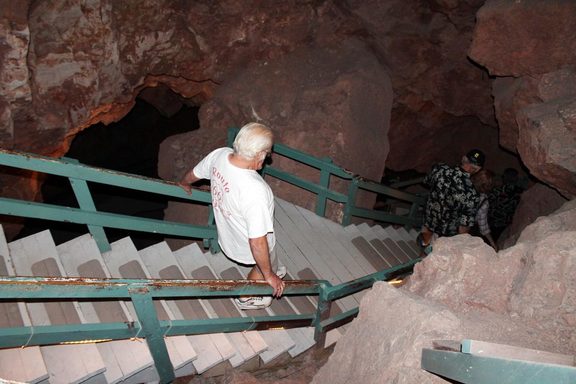 Tour the limestone caverns or view the night sky. The Grand Canyon Caverns community has a motel, RV Park, gas station, and restaurant. Train lovers can pull over and enjoy every type of train the Santa Fe railroad can offer. Passers by can fill up on gas at Grand Canyon Caverns very own 1960 modernaire filling station…one of four left in the United States.

Spend the night 210’ below ground

Take the elevator down 22 stories underground and spend the night in a place so quiet and dark, so large and so old, and so alone. It is not for everyone, but if you have the desire and will, you can do this. The Underground Cave Suite at the Grand Canyon Caverns Inn is the largest dry cavern in the world only place in the world where you can sleep underground!
​
Learn More