Cattle rustlers and gun fights are all part of Holbrook’s early days. Established in 1881 when the railroad came across Northern Arizona, Holbrook was known as a town “too tough for a church”. In 1912, Judge Sidney Sapp and his wife promoted the construction of the Community Church. Today this church is still active, and part of the Holbrook Walking Tour Guide obtained at the Historic Navajo County Courthouse where your adventure will begin. Built in 1889, the downtown courthouse today is home to the Navajo County Historical Society and their free museum, the Arizona Visitors’ Information Center and the Holbrook Chamber of Commerce. Visitors will see the old jail, Native American art and objects used by those who lived or worked in the town.  It is their story that is being told.

Holbrook has one of the riches Old West and Rt 66 histories of all the communities along the Mother Road. The Walking Tour Guide will take you to the Blevins House, where Sheriff Commodore Perry Owens serving a warrant shot three men. Their gravesites can be seen in the Municipal Cemetery. The Bucket of Blood Saloon, that is part of the Historic Henning District is another stop on the tour. Across the street is the restored Santa Fe Railroad Depot and the historic 1922 Scorse Mercantile Building.

Holbrook Is also a great launching point for other Arizona adventures including the natural wonders of the Petrified Forest National Park, Window Rock and Canyon de Chelly, as well as exploring Native American Cultures, the area’s rich Old West and Pioneer History, and some great amazing scenic vistas. 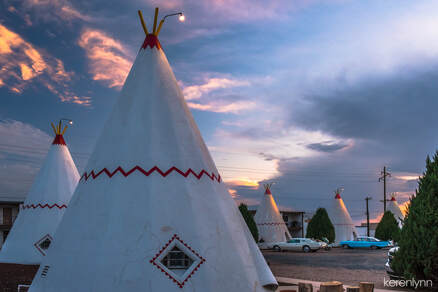 Route 66 enthusiasts will enjoy the Wigwam Motel with its teepee lodgings and historic vehicles. Kitch dinosaurs welcome you to the petrified wood shops and neon, such as at the Pow Wow Trading Post still highlights the historic buildings. There are also eateries such as Romo’s Café and Joe and Aggie’s where the families have welcomed hungry visitors since the heyday of Rt. 66.

Visitors in Holbrook will also be able to enjoy a round of golf at the Hidden Cove nine-hole course, and the adjacent Petroglyph Park. A list of other things to do while in Holbrook is available at the Visitor’s Center.

The community offers several events during the year such as the annual Festival of Trees and Lighted Christmas Parade the first Saturday in December. The annual Navajo County Fair is a five-day event in  September, the Old West Fest in October, Cultural Dances during the summer, and the 2020 Route 66 Days, featuring a car show, a Pin Up Pageant, Corn Hole Tournament and Burn Out Contest is scheduled for Friday and Saturday, June 12-13.